This is one pair of Dobinsons MRR Rear Shocks to suit: Holden Colorado RG 4WD (2012-On) 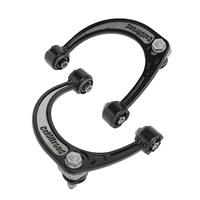